New hot social networks are being implemented and show up every day, maybe as an answer to the already established ones, maybe in some sort of competition or because their creators want to give people bigger, better, faster and friendlier opportunities to interact. We live in the Facebook era, that’s no doubt about it, and we practically reached that point where we believe that if something or someone is not on Facebook, they don’t exist, or their existence in negligible. Facebook and Twitter represent the major two most popular social networks, with a strong LinkedIn coming fast from behind, but with a different niche and different purpose. We have Google+, an idea that worked and which gathers more and more fans, we have Pinterest, where every artist can display his or her latest work and where mothers all over the world pin food photos. We basically have so many social networks we don’t have time to get social in person and many people started noticing we spend so much time in the virtual world, we don’t connect to live people anymore. This and the fact that Facebook became a PR, SEO and selling tool, while nobody actually cares about what others are writing. So in a world filled with opportunities to be “social” in a virtual manner, how many networks are enough? And do we need more? Apparently, we need, because new and new such networks are being tested and implemented. So let’s see together the new trends and explore ten new hot social networks that paint the universe of tomorrow in new colors.

Sounds a bit funny, if you think of its name, but this is supposed to be the next best thing in social networking. One of the major problems identified with Facebook is that it is so world-wide, it stopped being a tool for friends to share content and to keep in touch, it became an international phone book where people find it harder and harder to connect in a meaningful matter. They basically forgot about the niche. You can’t please the entire mankind with globally exposed content. You need to give people exactly what they want, when they want it. Sgrouples aims to do so, allowing people to have the entire control over their privacy settings, to become part of specific groups and to share specific content. One of its greatest features is live document collaboration (in the Google Docs manner), cloud storage, other networks integration (including Facebook or LinkedIn profiles) and a complete user’s control over who sees what content you display. Sgrouples is not just a giant living room we all hang out in, but a giant apartment, where people can choose a room and hang out in there. 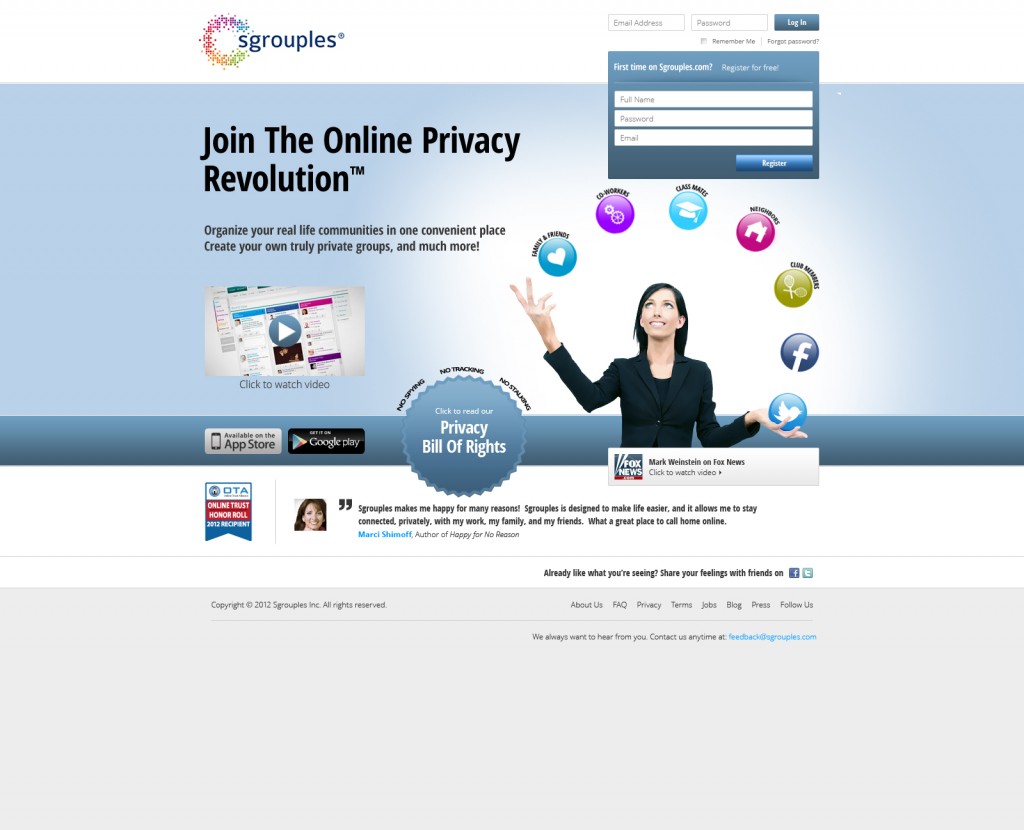 This is a blogging platform that is hot and interesting to be followed, as it is an answer to Twitter’s 140 characters limit, but not becoming a regular blogging platform where people write entire novels describing how yesterday they went to work and it was bad. The idea belongs to Evan Williams, the co-founder of Blogger and Twitter (not much of a surprise here, isn’t it?) and the concept is still under testing. We can only use the Beta version, as they are still working on it, but the platform as a whole is simple, user friendly, addresses everybody and allows articles from business to cooking recipes. As the network’s logo says, it’s not too large, it’s not too small, it’s medium. Maybe we didn’t need another blogging platform, but Williams and co. promises people a new, enhanced networking experience. 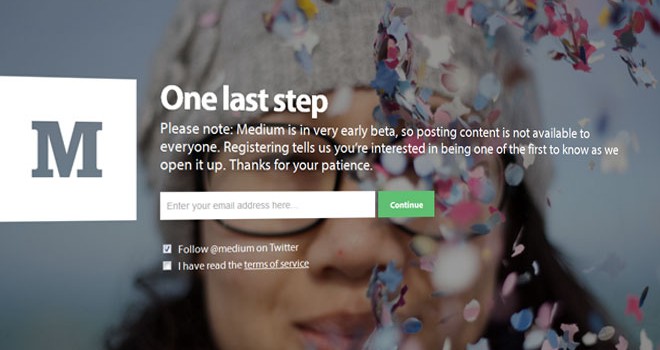 This one is even better than Facebook or other social networks, as it is probably the only one trying to get people to step away from the computer and get real live connections with others that share the same interests and hobbies. How can a virtual platform can get people physically out of the house? Easy. Nextdoor allows the user to connect with people from the same area and neighborhood and share interests, meet new real living people and engage in activities together. Of course, there is the issue of privacy and personal security, as Nextdoor sign up procedure requires your personal home address. “Living next door to Alice” gets a whole new perspective with this social network, as  people got sick and tired to share content with perfect strangers who bare the name of “friends” but who never cared nor will ever do about who you really are. Experts say that this platform will change the way we see virtual networking, as it will take people out there in the open. 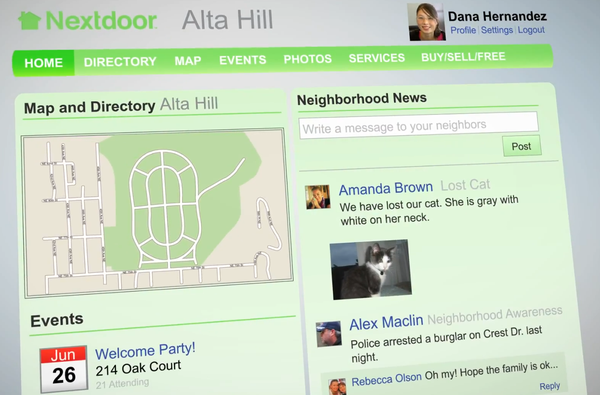 Humanity reached that point when we are no longer satisfied with large social networks and we want to build our own. What’s cooler than having your own group and networking platform? Kleek is an iPhone app which allows the user to build his or her own social network within Facebook. Yes, and? What is the purpose, you might want to know? Let’s talk about usability. You want to check up only on some specific people and specific content, without having to scroll down hundreds of statuses, people you couldn’t care less about or load your iPhone with useless computing and processing efforts. To get rid of all the trouble, Kleek lets you get info only from your closest of friends. Of course, back home in front of your PC, you can indulge yourself with data from everybody, but being mobile and on the run, Kleek is the answer to our ancestral need to know how our close ones are doing. 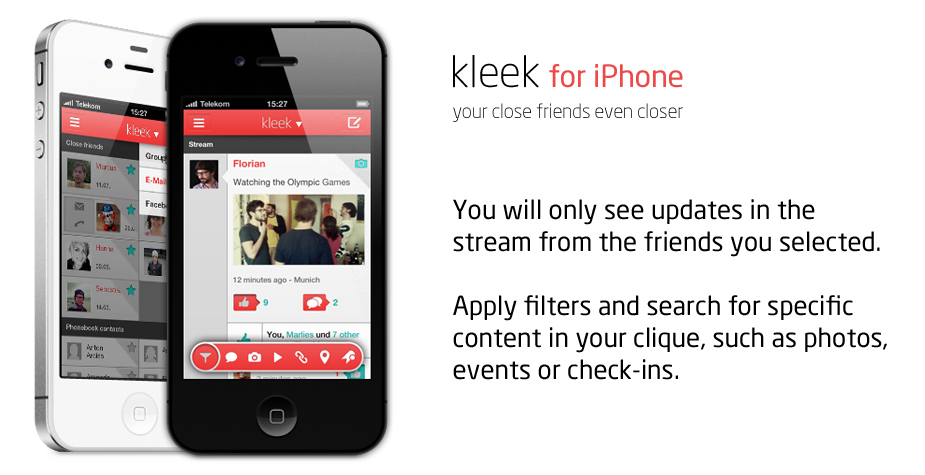 This social network, which is not basically a social network, but we’ll explain this right away, is built on the belief that to be social and to be in contact with the real people that you care about is something deeper and more personal than counting the number of LIKES your latest status gained. To be social and to network means to stay in touch and share significant content to people who are friends for real. So how many friends are enough friends? Path is a mobile network which is founded on the concept of private lifestreaming (unlike Instagram or Twitter, which are based on public lifestreaming), allowing the user to share important “moments” (not statuses) with a defined number of 150 friends and contacts. Path give the users a sense of intimacy, a feel of “what happens in Vegas stays in Vegas”, as some things can be only shared so much and allows the happy customers to combine the ever growing mobility that reflects and characterizes today’s world with the joy of being in contact and sharing personal posts with real people. 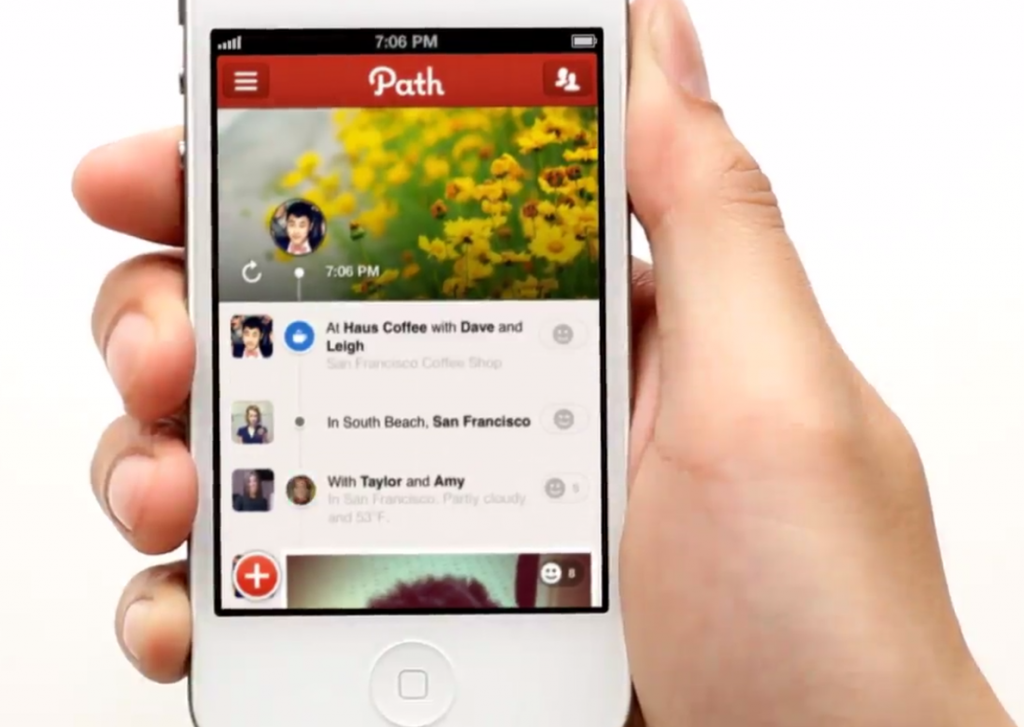 Everybody’s going mobile, right? And everybody wants to be in a niche, as people started resenting the fact that they receive status updates and info from people they don’t know or from ones that apparently made their life’s mission from posting “stupid” updates regarding their pets, their kids, their complete lack of understanding other people or their eagerness to finally reach Friday, just as last week. Not to mention that everybody wants to sell you something. So. Mobile and niche content. Ladies and gentlemen, buckle up as Pose is the new cool trend in mobile networking, combining fashion with technology in ways people never thought about before. Pose means photo sharing of your own outfits and fashion accessories with others and can be considered the Instagram of catwalks. You benefit from a simple, friendly landing page and sign-up procedures and you can become a part of this interactive fashion magazine. This would have made the girls from Sex and the City squeal in joy. 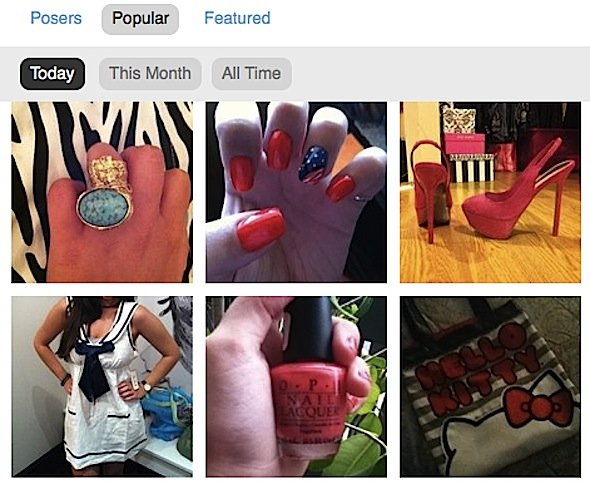 This is the new YouTube for social networking at a fast pace. Let’s call it the Instagram of short videos. Let’s call it a way of being mobile, embracing a niche and wanting to share more than “Tomorrow is Monday, bleah!”. Viddy is a phone app compatible with both Android and iOS and allows the user to shoot 15 seconds of video (which is a little too little if you ask us) and to add them special effects such as color filters, music effects and so on. You can share your own personal productions on other networks, such Facebook and Twitter and Tumblr. Was it really necessary? Maybe not. We have a lot of options to share video content and larger than 15 seconds too. Is it hot? Yes, because we all secretly want to become movie directors and being professional photographers is so yesterday… 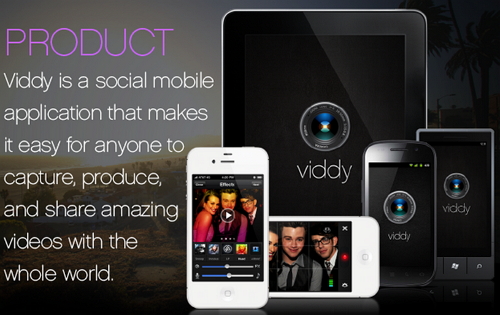 Not one single new hot social network, but a new concept. Today’s world is mobile. And getting even more mobile. So in new terms, social networking means mobile applications. Means operating an iOS or Android phone and having the opportunity to actually be out of the house and not stuck in front of a computer. So what are the SoLoMo? Social-local-mobile platforms that allow people to stay in touch with contacts and new people from their local proximity. Yes, Facebook lets your friends know you just ordered a large portion of chicken noodles in your favorite Italian restaurant, but these smaller, mobile apps allow you to meet people for lunch, find out more about those who seem to frequent your favorite hot spots and know where your friends went for shopping. This, of course, raises the important problem of geotracking and personal privacy, intimacy and even safety, as we all complain about Big Brother watching us, but we are more than eager to share our current location with an entire world of strangers. Among the best SoLoMo apps, we have Highlight, Ban.Jo and Roamz and, apart from being useful and user friendly, they are also a subject of controversy.

It was once a Titan. It was once the father of all social networking concepts, of all ideas and of all possibilities, until it lost the battle with Facebook. Nowadays people don’t actually believe that MySpace will ever be what it was before, no matter how many cosmetic surgeries and app implants it will be subdued to. However, the new MySpace doesn’t even want to be what it was, nor does it want to engage in a direct clash of competition with Facebook. It wants to be different and in the mean time, it learned about niche content too. One good thing about the new and improved MySpace is that it kept all the old awesome things that back in the day made it so awesome: music. So musicians and their fans will still be able to find themselves and each other through this platform. It also looks simple and friendly, interactive and fun and it wants to prove once and for all that people wanting to find specific content have the opportunity to access specific…spaces. 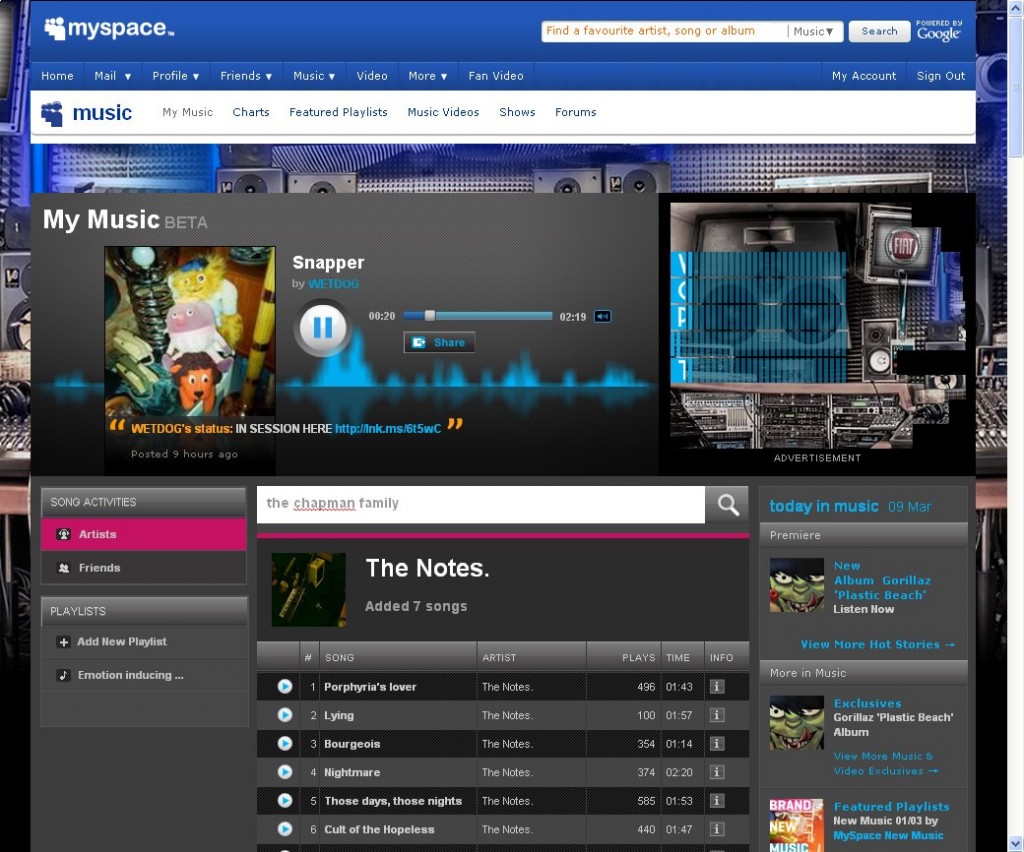 Mobile, mobile, mobile, this is it and nothing else. And the concept of integration. So Atmospheir is an iPhone app that promises a very interesting feature: information unification from all the other social networks and integrating them to the same address book, making it easier for the users to stay in touch with virtually (no pun intended) with everybody. Somehow, this might actually complicate things, while other mobile social networking applications intend to simplify them, but you may never know what the future holds. 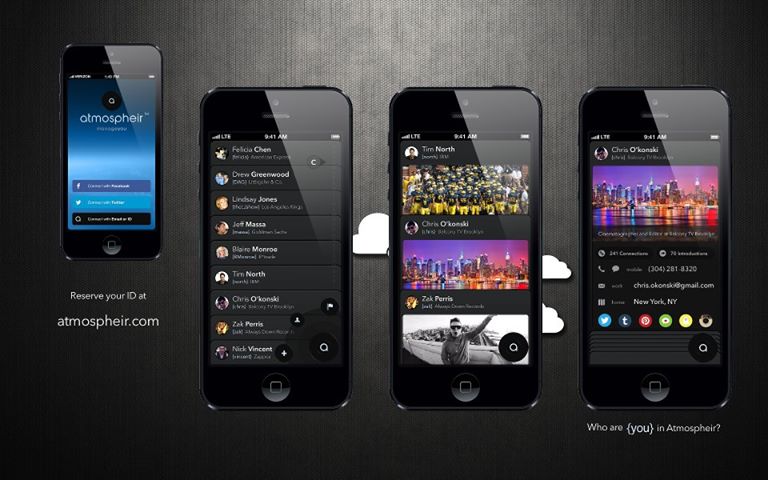