There are many ways of predicting the future and predict your love life, but the Tarot cards are by far the most popular divination method. Whether you believe that your future is already written and you’re just following a pre-established path or you think that we have the power to change it and make of it what we will, you must admit that predicting your future is truly exciting business. And what’s more exciting than to predict your love life? Are you going to have the best love story in history or are you two going to break up and find love elsewhere? Are you going to find the love of your life? Will you divorce? Will she/he love you for ever?

These are all question that someone who goes to a Tarot reader wants to find answers to. The Tarot cards are especially juicy when it comes to love life, because many of them are focused on love. We’re going to present to you 10 Tarot cards that predict your love life.

There are a few things that need to be said before going any further: there are 78 cards in the Tarot deck, divided into the Major Arcana (22 cards that represent basic human emotions and archetypes) and the Minor Arcana (56 divided into four suites: Cups deal with love and emotions, Swords deal with matters of the mind, Pentacles handle earthly things such as money and possessions and Wands deal with creativity, action and movement). This doesn’t mean that a Pentacle card can’t tell you something about your love life! Read on and maybe this article is going to make you give Tarot a chance! 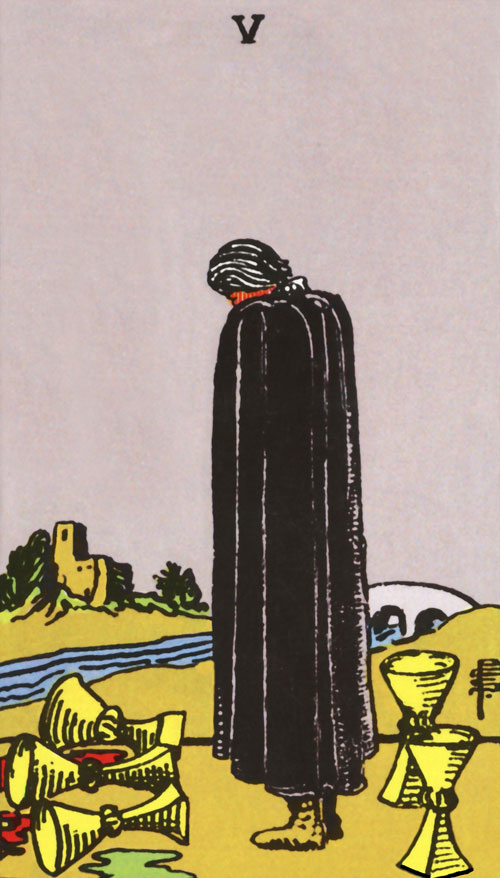 The Five of Cups doesn’t foresee a sad scenario when predicting your love life, as it may appear. While it could symbolize regret, loss and bereavement, it’s also telling you that you should focus on what matters. Look at the man or woman in the cape, they are looking at the cups that have been knocked down, feeling sad about the situation, but they don’t see the two remaining ones. It’s the perfect analogy for when you feel like you’ve lost someone or something and everything else seems to disappear in your life; you’ve lost the one and thus, you’ve lost everything. But you should look around you and you’ll see plenty of things and people are still there for you. 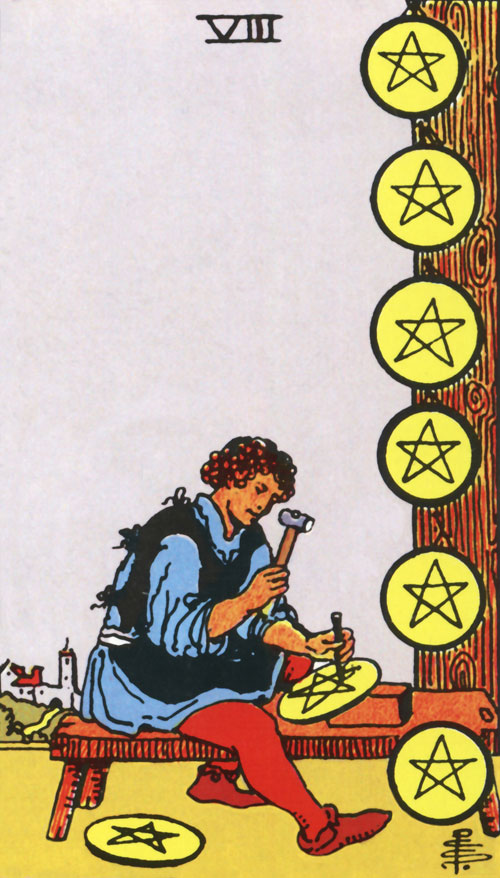 If you have doubts about your current relationship and you get the Eight of Pentacles, then this tells you that you have to work to make your relationship function again. Just like the man in the picture, who is patiently and diligently working with his hammer and chisel, you will need to get your priorities in order and put in the hours. You’ll need to first learn how you can make it work, then put in practice what you’ve learned. It’s a card that isn’t handing things over to you, it’s telling you that you have the power to fix things and that it’s not easy to do it. 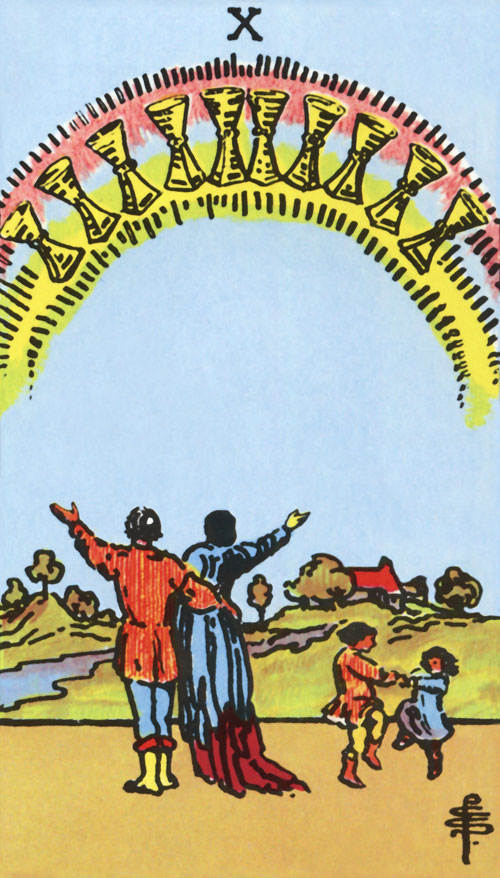 This is the card you want to see when you have someone predicting your future, your love life and family affairs. You see the happy couple saluting the sky, the children are playing near their parents, the sky is clear and you feel the love this card radiates; there is a house in the distance and a peaceful river. All this symbolizes joy, peace and domestic happiness. It can also mean that you’re making amends with some members of your family, that you’re bonding with family and that you’re counting your blessings. 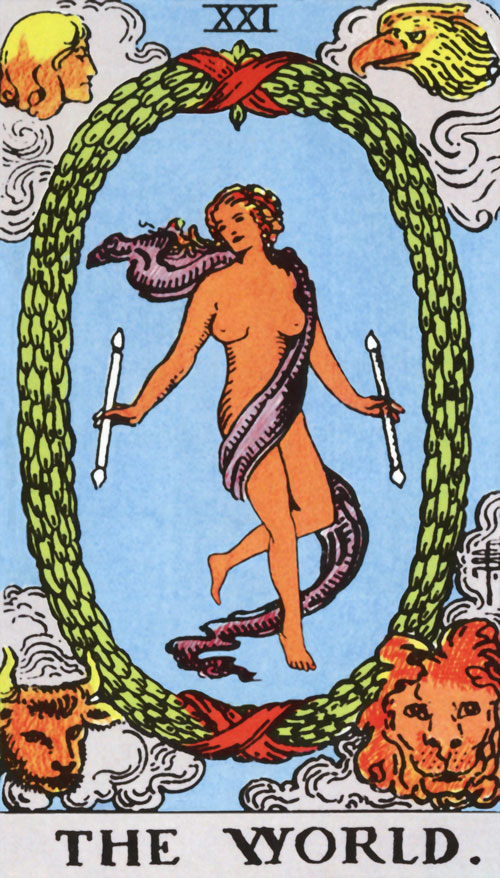 If you’re having someone predicting your love life, then seeing this card should make you happy. It symbolizes integration, accomplishment, involvement and fulfillment. This card represents harmony, everything working together to make something perfect and beautiful. Your relationship is on the right path; a path that if you continue to follow will bring you nothing but happiness and fulfillment. 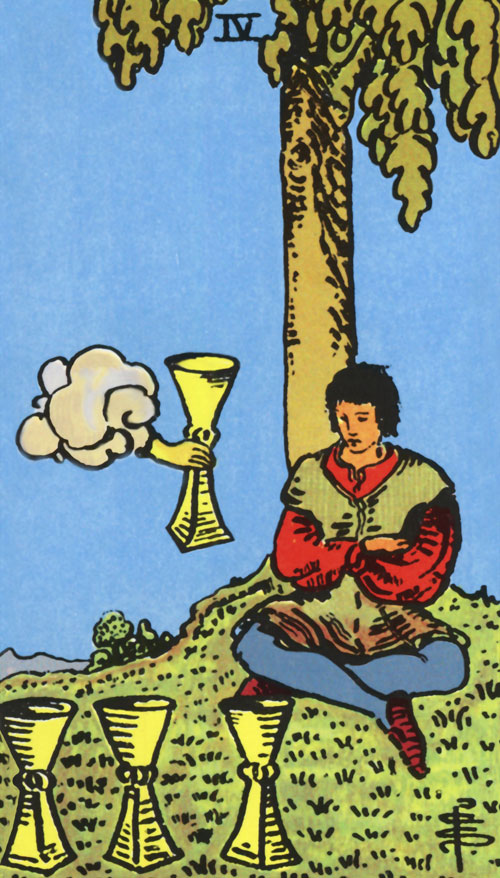 Before we’re telling you what this card means, look at it and try to make out on your own a few things. We see a man sitting down next to a tree with his arms crossed; there are three cups in front of him and one more being offered to him by a hand, yet he does nothing, it appears that he doesn’t even notice them. What do you think it means? Well, basically it suggests that you’re bored with life and what it has to offer you. You simply refuse to drink from the cup life itself gives to you. If this card falls in a position that represents your love life, it means that you’ve pretty much had it with your current situation and you need change. 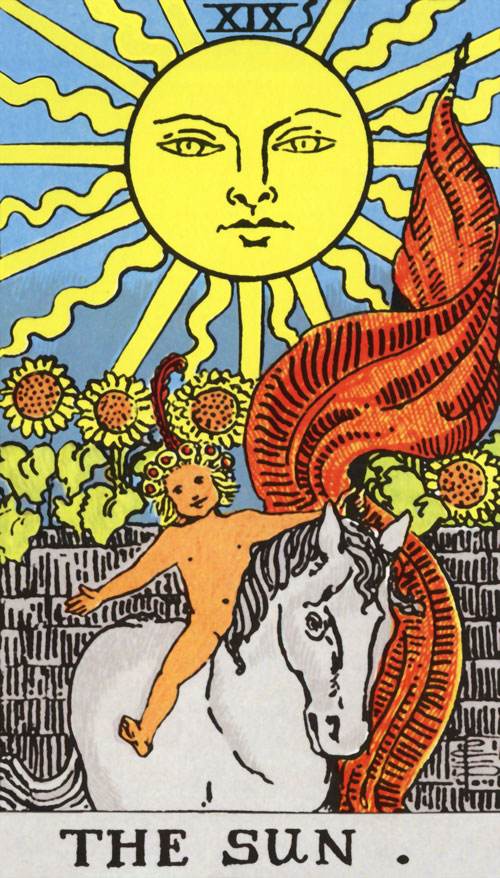 The Sun is a glorious card, maybe the best card in the Tarot deck and if you get this when you’re having your love life predicted, then breathe a sigh of relief, everything’s going to be alright. The relationship you’re going to have will bring you happiness, will enlighten you and fulfill you. You’ll feel full of vitality and live a carefree life. Everything in the picture is giving out great vibes: the sunflower in the background is a sign of prosperity and happiness, the sun watches over the entire scene with a stern, yet peaceful look, the child on a white horse is happy – things can’t really get any better than this. 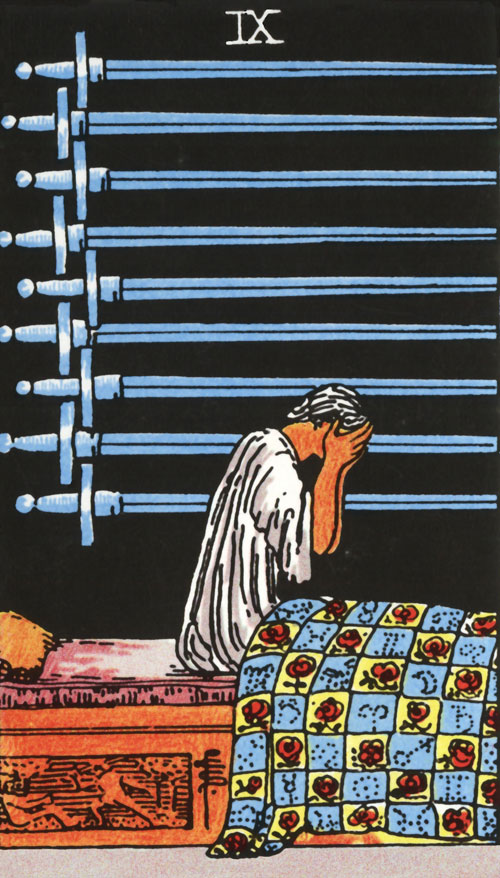 If the Three of Swords will warn you that you’re going to be getting some sorrow in your life, then the Nine of Swords is telling you that you’re going to be in quite a lot of pain, anguish, feeling guilty and worried. It’s a card nobody would like to see when someone’s predicting your future, but if you do get it, the only thing you can do is calm down and learn from it. Apart from warning you about the bad things that are coming your way, this card is telling you that you should not let remorse and guilt overwhelm you, that you’re focusing too much on the bad and should start doing something to change your current situation. 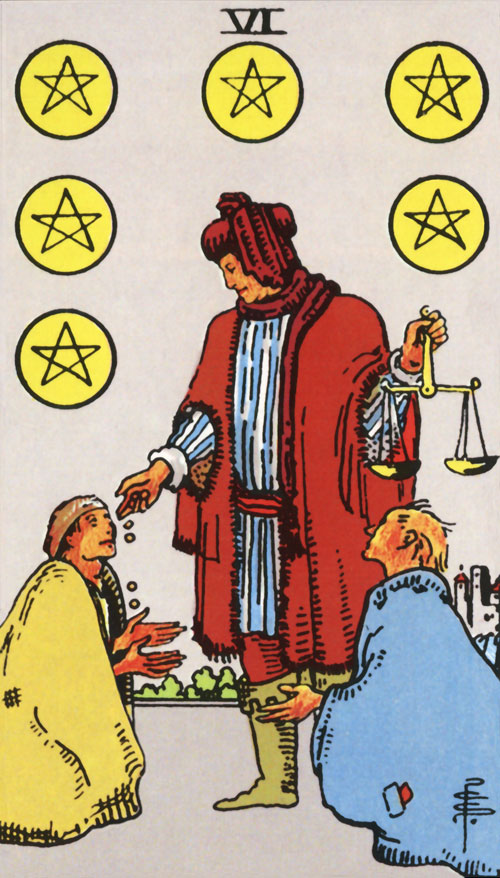 This card isn’t a card that primarily deals with love, but with power and interpersonal relationships. Look at it closely: we see a man who appears to be wealthy and he’s giving some money/food to two beggars. Look at his scales, they’re not tipping. That means that what he’s giving out isn’t something that he’s going to miss. If you get this card when inquiring about your love life, it means that either you or your significant other aren’t involved in the relationship wholeheartedly. You’re just like the man in the picture: you’re giving, but you’re not feeling it. You are in a position of power, you have control over everything and that, in a relationship, can mean trouble. 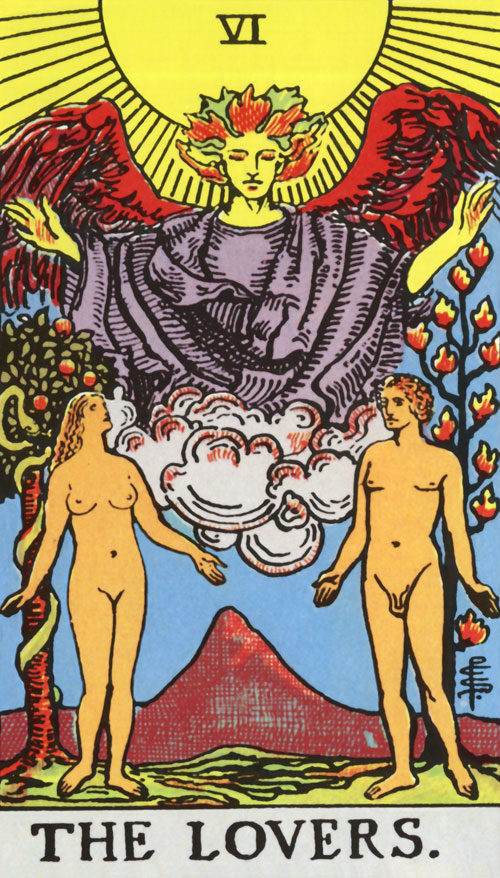 The Lovers is probably the most love-oriented card in all the Tarot deck. It represents your relationships, sexuality, personal beliefs and values. If when predicting your future, the Tarot reader reveals this card to you, then you know that you’re going to meet new people and establish new bonds, are going to get closer to a person you’re interested in and your sex life is going to get more and more interesting; you’re opening up and seeking union with someone, you’re following your sexual instincts and making a decision about the person you’re hot for.

1. Predict Your Love Life with the Three of Swords 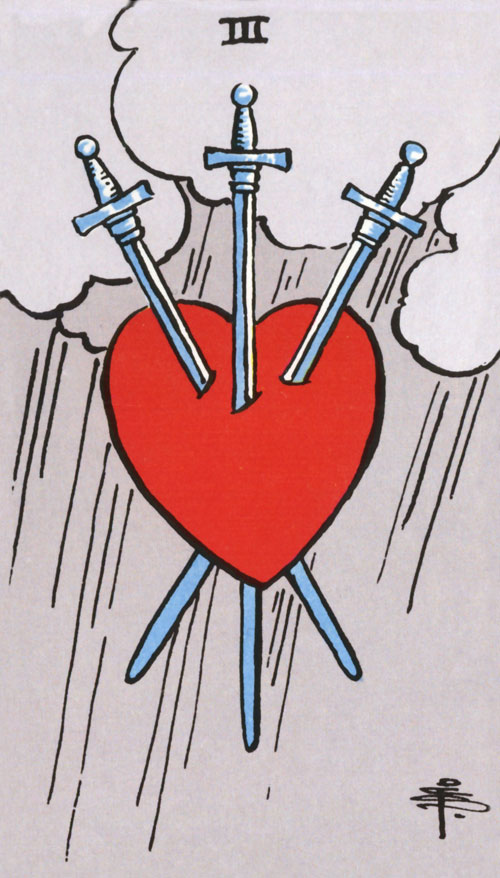 The Three of Swords is also called the Sorrow card. Just look at it and study it carefully. You see the heart with three swords in it and in the background there is rain, darkness and clouds. This card will show up if there’s going to be betrayal, sorrow, pain, love loss and loneliness in your future. But that’s not all that this card will tell you, because it’s not showing itself to you just to scare you and warn you, but it’s also telling you to be strong and know that the clouds will pass and the swords will fall out of the heart and it will heal again.

Have you ever tried to predict your future? How did it go? Would you like to have someone predict your love life? What did you think of the cards? Tell us what you think in the comment section below.