Smoking as vice or lifestyle has been disputed for decades and, as little as we’d like to admit, it still is a constant part of our lives. Cigarettes and smoking have been the main characters not only in movies, commercials, social trends or medical disputes, but also in some very special peoples’ lives. Historically and culturally speaking, the cigarette has managed to reach every human, every society, and every continent. From the ancient Amerindians to the farthest of the African or East-European village, the cigarette and its family of pipes, cigars and hookahs was present at most of historical events of mankind. It  was often seen portrayed as a woman: allusive, inciting, deadly.

From a cultural point of view, the cigarette fascinates and lights up interminable debates. It has been associated with style, with the new feminist movement, with the new cinema, with powerful men and life or death decisions that influenced the fate of mankind. It has been linked with high intellect, high class, low class, lords and beggars, with alcohol, food or sex. Once appraised from a medical standpoint, the cigarette entered a dark corner, as people all over the world started talking about its negative effects and the incommensurable health damage. Humanity has become more and more aware that no matter the style, no matter the glitter, the fun and the social habit it provides, the cigarette is continuously banned and put to shame. But some people, many of whom are no longer among us, made smoking a lifestyle out of a vice and history will remember them as some of the most famous smokers of the world, as well as icons of the field they impressed us in. 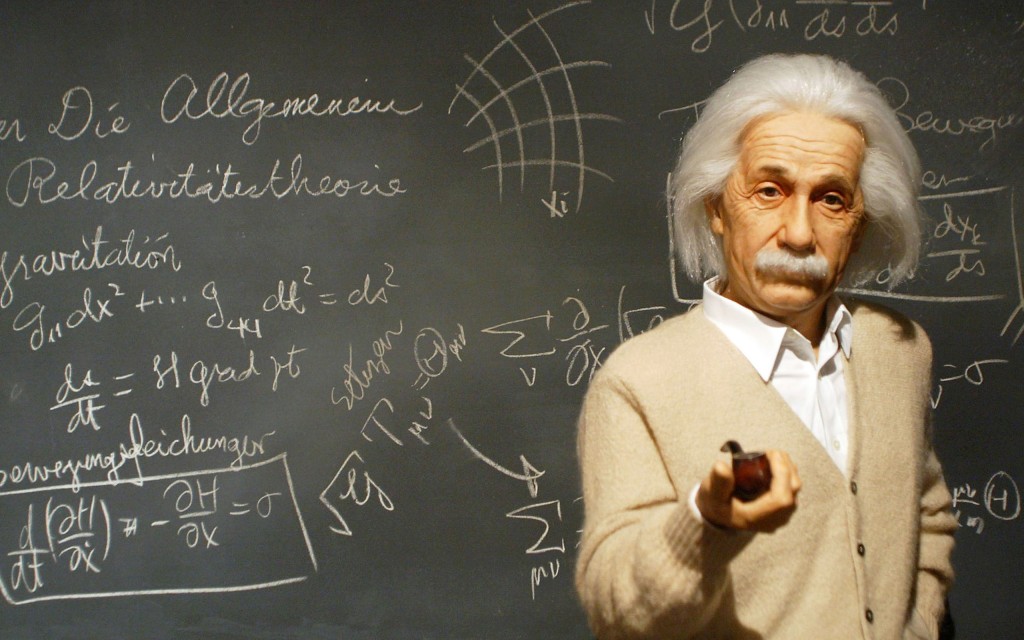 Famous German physicist, associated with pure human genius, Einstein became famous not only for his childhood poor intellect that never predicted the future changing-history figure, but the Theory of Relativity and the fact that he was a famous pipe smoker. Few photos picture him without his pipe and, a lifetime member of the Montreal Pipe Smokers’ Club, Einstein always supported tobacco smoking. He once stated that “I believe that pipe smoking contributes to a somewhat calm and objective judgement in all human affairs” and an anecdote tale says that once he fell off the board of a cruising vessel and courageously fought to save his beloved pipe. 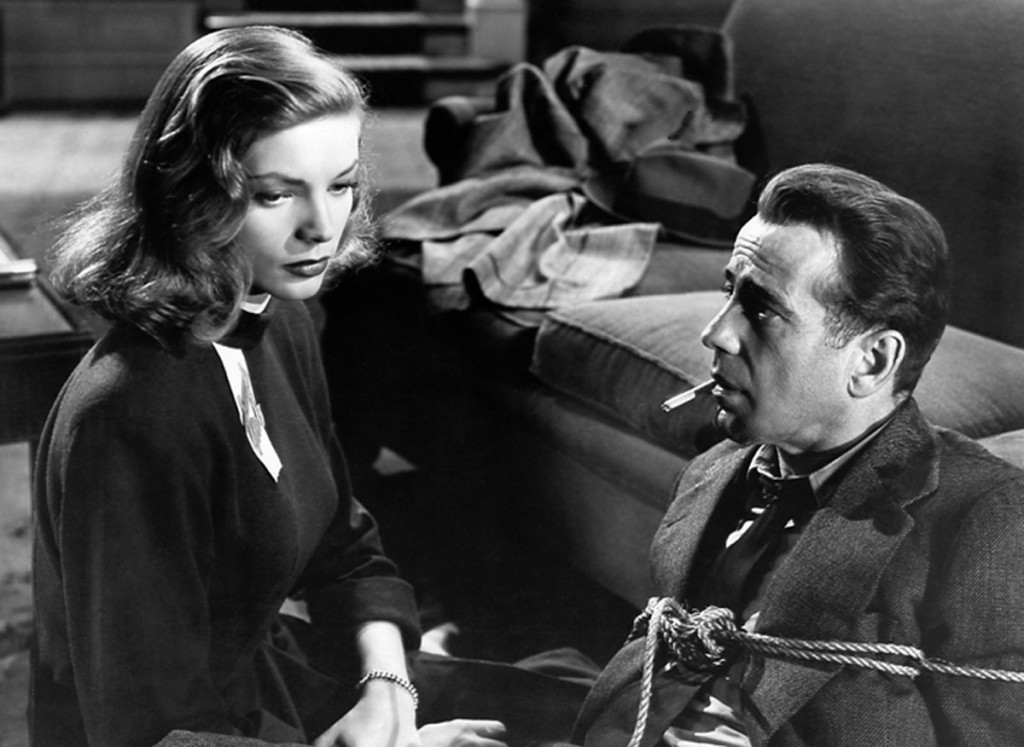 Many actors smoked and still smoke, but Bogey is definitely one of the top famous smokers of the world. For Bogart this was a lifestyle that transcended his real life onto the silver screen. The silent moments in Casablanca, filled with tension and passion were brilliantly completed by the thin bluish smoke coming out of his cigarette and we would have never tasted The Maltese Falcon as we did without Bogart’s smoking, which he turned into a personal trademark and almost made it part of his acting aura. In the Big Sleep, the cigarette confers him rhythm, if until then it conferred him charm. The epic scene when Lauren Bacall lights a cigarette for him and puts it between his lips, while he’s tied up to a chair made a riot back in the day, as barely seen from his profile, with only the smoke slowly detaching from his face together with his words and becoming wind, Bogart managed to impress women and viewers altogether with his cool attitude and the manhood that emanated from his pores. 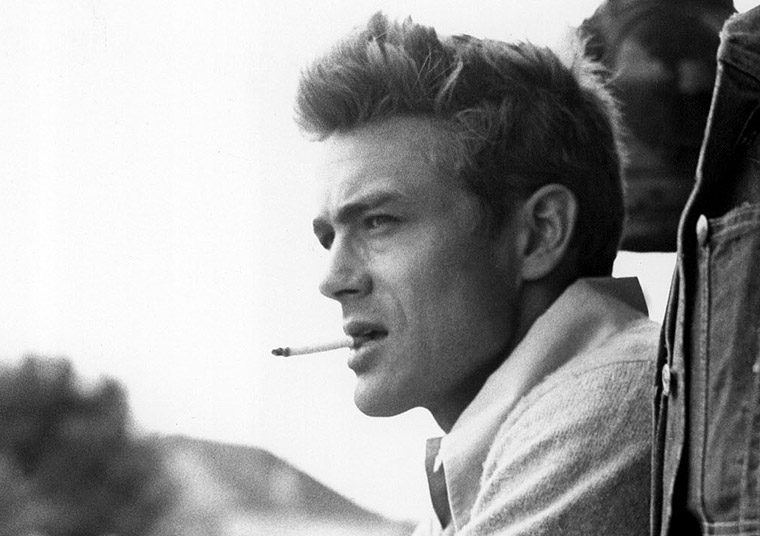 A life lost too early, James Dean was a two-pack a day Chesterfield guy who marked for life the post-war young American generation especially with the role of Jim Stark in Rebel Without a Cause. Although he had a very short life, his career had a great potential, especially starting with the role of Cal Trask in Elia Kazan’s East of Eden, a movie adaptation of J. D Salinger’s novel. His life’s hits are going to be Rebel Without a Cause and Giant and he is the one that determined the American Film Academy to make an Oscar postmortem nomination. Tragically killed in a car accident by the age of 24, Dean remained a symbol for an entire generation, portraying the sensitive, nonconformist young rebel, the product and the icon of generation gap. 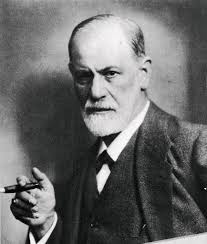 The famous neuro-psychiatrist, father of psychoanalysis and one of the most controversial figures in the world, was intensively preaching non-smoking to his patients and stated countless of times in his theories and works that smoking was a mere replacement for the long lost childhood pleasure of masturbation or, he considered, people who smoked had an oral fixation. The man maybe knew or not what he was talking about, but the truth is, he never stopped smoking his famous cigars, which he kept on smoking even when a form of mandibular cancer tormented him during his last years. While in pain and suffering, it is said that he puffed even 20 cigars a day, as he discovered that nicotine kept him vigilant enough to work. 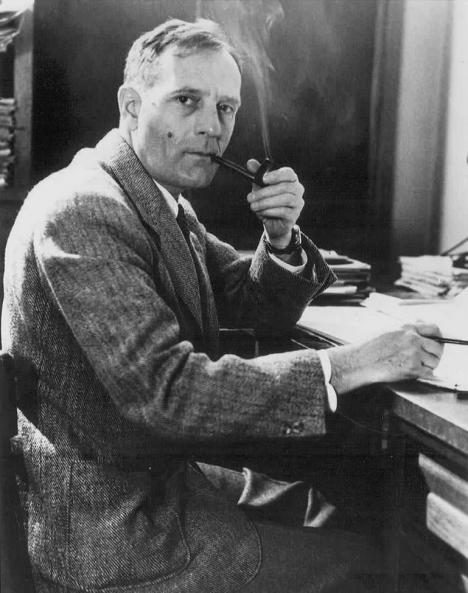 One of the biggest American astronomers and maybe one of the biggest in the world, Hubble was a dedicated pipe smoker and also a visionary. He is the man that profoundly and forever changed the view of the scientific world upon the nature of the Universe, as he demonstrated that there are many other galaxies besides the Milky Way. He also proved that the Universe is actually in an expansion state and there is a Hubble Law that proves this fact as being true. He fought a great part of his life that astronomy and astronomical discoveries to become a part of Physics and to be granted Nobel Prizes and soon after his death the Nobel Committee decided that astronomy papers and works to be eligible for Nobel. 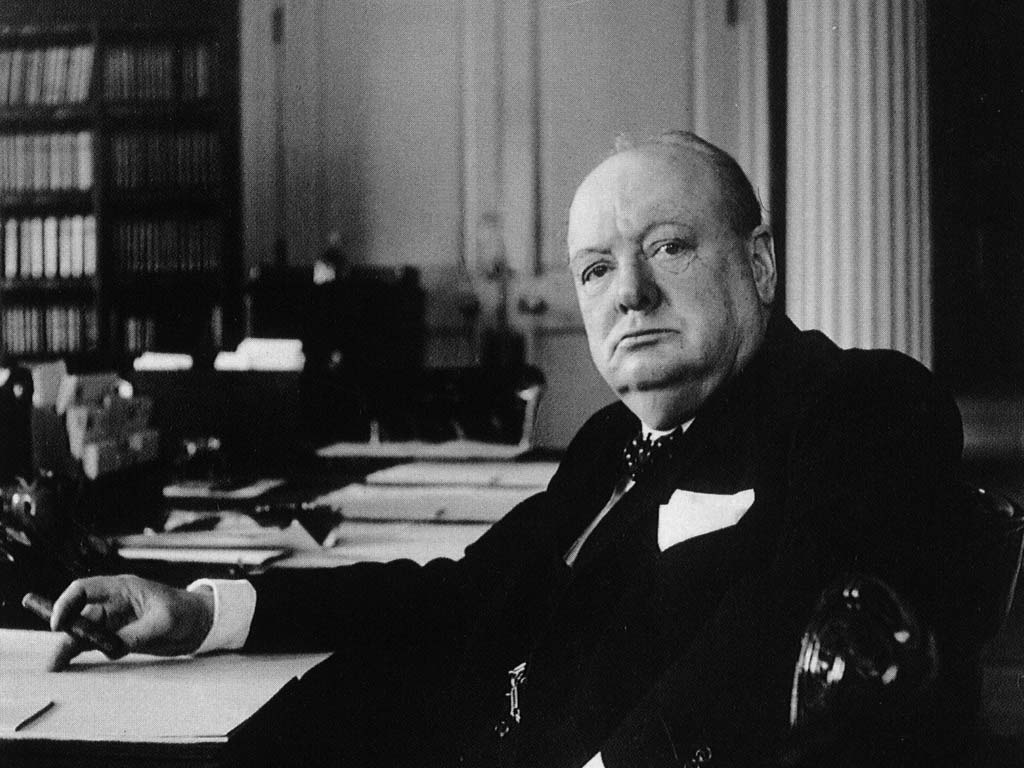 One of the most notorious political figures of all times, Churchill was a very charismatic British Prime Minister who is known for his political demeanor, as well as for the cigar smoking habits, which make him one of the most famous smokers of the world. He is deeply associated with this type of smoking and archives say that he didn’t leave anywhere without his cigars. He started smoking in his twenties and only an oxygen mask in a depressurized cabin in a high altitude flying airplane could stop him from puffing a cigar. During a visit in Saudi Arabia, in the presence of king Ibn Saud – who didn’t tolerate smoking in his presence – Churchill held a humorous speech about his sacred habit of smoking and having a short drink before and after his meals, being welcome in all pauses between meals. Needless to say, the king accepted. 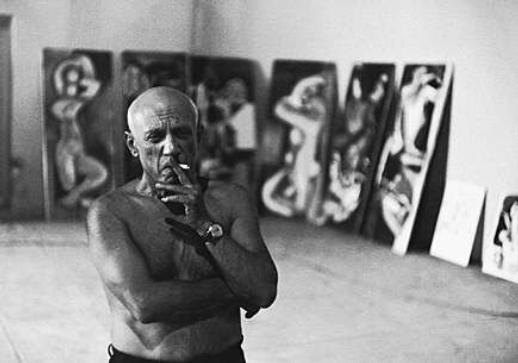 The famous painter is considered one of the most brilliant artistic personalities of the twentieth century. About Picasso we know a lot of things, from the starting point of his career to his becoming one of the world’s most appreciated and sold artists, with works that transcend time and history. We also know Picasso had interesting, refined, not to say exotic taste in women and cigarettes. He had a soft spot for the French ones and he always associated the act of smoking with the act of seduction. Much like Bogart did. In his art, he attributed smoking quite an erotic dimension, as at least one of his paintings speak about his view on cigarettes and smoking: Boy with a pipe. 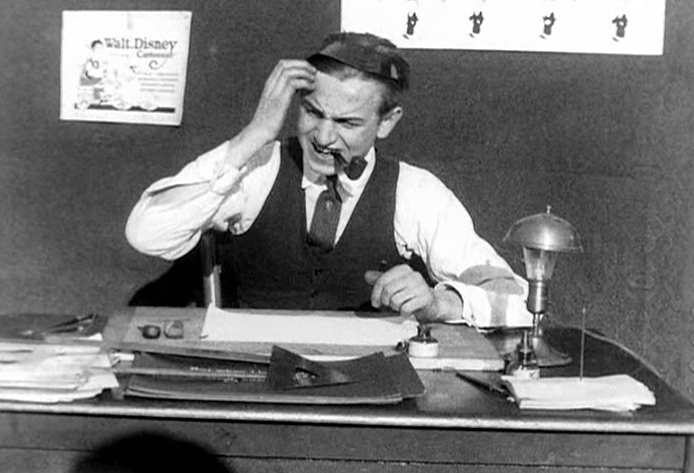 The man who was told he was quite untalented to draw later became an icon in cartoon making and cinematography. He had one of the most prolific cinema careers of all times, winning 22 Oscar Awards and leaving behind an unmatchable legacy. He smoked one cigarette after the other but, unfortunately, his vice eventually became his mortal enemy, as he died of lung cancer, stopping him  from feeling the great joy of his projects making happy millions of people all over the world. The Disney Company took very seriously his story and his demise and while continuing his projects, the remaining executives decided to forever ban smoking from their motion pictures. 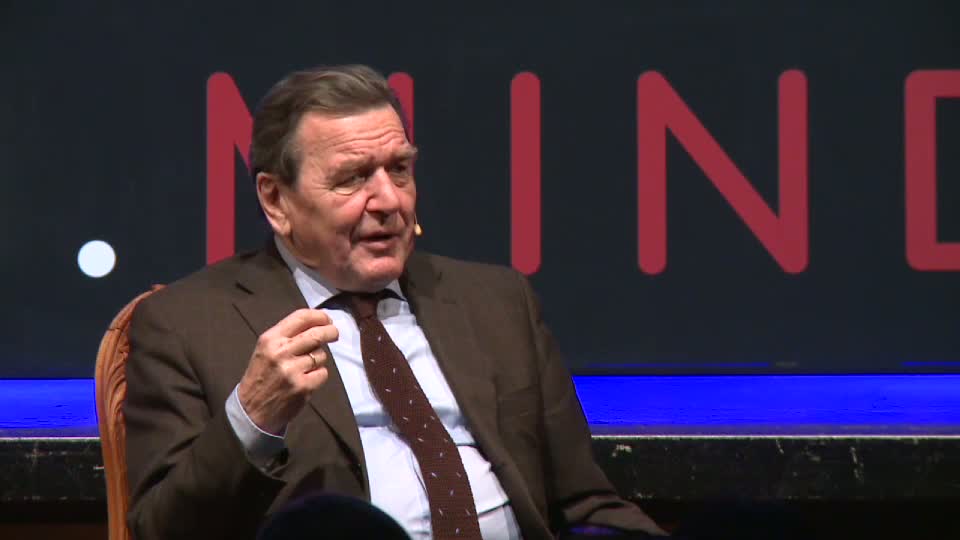 German politician of inestimable geo-political value, Schröder was German Chancellor from 1998 to 2005. Known for his political views, a trail of four wives and the fact that he was the first German Chancellor who upon being invested in his new position, willingly gave up the traditional statement “So help me God”, Schröder was and still is a passionate smoker, one of the top famous smokers of the world. Not many photos show him lighting a cigarette up, but they say that many political decisions were taken by the politician while holding a cigarette between his fingers, behind closed doors. 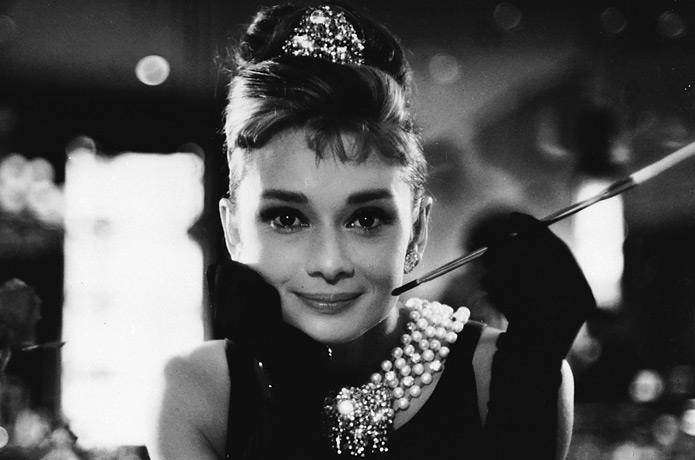 When you think about smoking and Hepburn, you think about the 20 cm long port-cigarette and the sophisticated gesture of lighting one up. This particular movie star almost sublimates the cigarette, as it becomes a natural elongation of her own body. An unforgettable silhouette, with long illusionist’s fingers,  with a body language that suggests complicate symbols of an ancient world, Hepburn always showed up in stretched couture Givenchy dresses, assorted with long gloves. She consolidated the image of the femme fatale and the cigarette never left her. It made part of who she was and led us to believe she was.

As much as we hate it, there are plenty more famous smokers of the world out there. Any of them you would like to see featured on our list? Whom did we miss? Let us know in the comment section!