To choose and list 100 best movies of all times is definitely a difficult endeavor, for movie critics, film directors, movie magazines and even fans. What are those traits that – provided a movie has them all – make it “the best?”. If you browse the Internet, you will find hundreds of such lists, all compiled either by specialists, or by public vote. Some of these lists count the awards won by a movie, the IMDB (or other similar sites) ratings, the box office success or the critics’ views and opinions.  And let’s think about this “all times” criteria. Was a movie the best movie ever made at his time and can it be compared to the best movie ever made last year? How can you choose between a huge silver screen success from 1940 to one released two years ago? What makes a film immortal? What makes a movie so good that we can list it in the “all times” criteria, despite the fact that 40 years ago the movie making technology was close to zero, while today it became rocket science? And how about genres? Can you compare Casablanca to Matrix and is it fair to do so? When it comes to creating a top best list, the odds of upsetting somebody with your choices is impossible to avoid, as films, just like any other form of art, are subjective, emotional and exposed to never-ending debate. Citizen Kane is no longer the best movie ever made, as it was for 50 years. The Godfather still makes the number one headline in the IMDB list, while The Shawshank Redemption is AMC’s golden boy. In order to make this list, we will consider movies as being immortal, long-lasting masterpieces and forever best movies of all times based on the public’s vote and their long lasting emotional impact. So let’s get the show on the road!

The story: Lester Burnham is a middle aged man living in an unhappy marriage who develops a very unhealthy obsession with his daughter’s best friend. The troubles he goes through in order to seduce the sexy adolescent turns him in a new man and throws him in a world of trouble, as his marriage is visibly falling apart, while the relationship with his own daughter is far from being normal. Finding beauty, finding peace and freedom, as they lie just in front of us waiting to be discovered, these are the subtle messages this movie offered, together with a realistic, cold view over human relationships.

Why is it on the list: Because it was more than a drama, it was a tragic comedy that played with deep concepts such as identity crisis, love, tyranny, sacrifice. It became a cult – movie over the night and revolutionized the world of cinematography with the post-modern Lolita subterfuge, the not so subtle satire to the American middle class way of  life, it mocked a little every aspect of the American dream and ended both sadly and happily in the same time. The acting was flawless and the movie as a whole concept created mass hysteria back in the day. 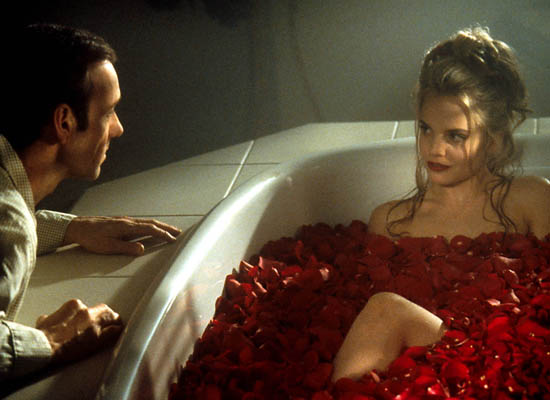 The Story: This is a movie adaptation after Stephen King’s work and was directed by Frank Darabont, the same brilliant director who forever put his fingerprint over Shawshank Redemption. In the Green Mile, Tom Hanks plays the chief guardian of Cold Mountain penitentiary for capital sentenced convicts. Through flashbacks, he tells us the story of a man named John Coffey (played by the beloved and most regretted Michael Clarke Dunkan) about whom he begins having doubts about his belonging to that compound. Being a Stephen King work, the story revolves around a dash of paranormal and mysticism which deepens the plot and gives the movie its powerful message.

Why is it on the list: Because of those first moments at the beginning, when an almost psychotically mean guard shouts “dead man walking”. Because the second you see Michael Clarke Dunkan, you realize this is not going to be an ordinary story. Because the movie is slow paced but so alert in the same time, it keeps you there hanging with your heart in your throat for almost 2 and 1/2 hours. Because it can make you laugh, cry, scream, get angry, get soft and never be the same again after you read the credits. Because it is a story about humanity caught in its most beautiful and darkest moments and displays.

Quintessential quote: “On the day of my judgment, when I stand before God, and He asks me why did I kill one of his true miracles, what am I gonna say? That it was my job? My job?” (Paul Edgecomb) 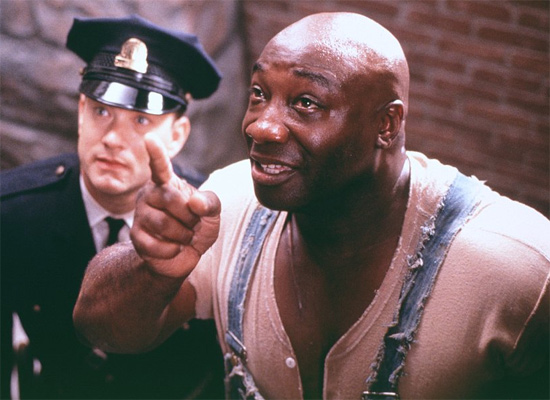 Awards: No Oscars, but 3 international awards

The Story: Léon is an indestructible, invisible, natural – born contract killer, who is illiterate, owns a plant and drinks a lot of milk. He has no money and no friends but his lonely universe is completely disturbed by a 12 year old Mathilda, a girl coming from an abusive family who ends up in a lot of danger. Slowly, the killer’s defenses and coldness break apart and, against all good judgement, he lets the girl become part of his soul, with deadly consequences.

Why is it on the list: Because this might be Jean Reno’s best roles ever. Because in spite of the violence, this is a story about human connection, kindness, love and sacrifice. Because seeing Léon progressively being melted by the girl’s innocence and true love, watching him being torn apart by his conservation spirit and the love Mathilda plants in him every day is something that defines good acting that crosses the barriers of genres, styles and filming techniques. Because there is humor, drama and tragedy intertwined there, with the brilliant participation of a psychotic Gary Oldman in the role of the villain. Because nothing is what it seems: the killer is a good, kind person, the cop is corrupt and evil and because the conflict of ages, mentalities and egos makes this movie a masterpiece of emotional displays.

Quintessential quote: “I don’t give a shit about sleeping, Leon. I want love, or death. That’s it.” (Mathilda) 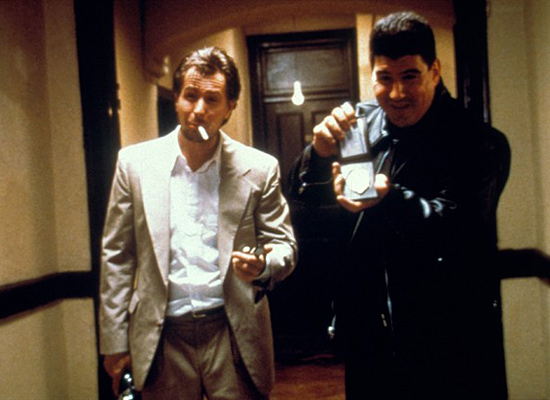 The Story: Young banker Andy Dufresne is jailed for life for the murder of his wife and her lover, although he pleas innocent. He’s sent to Shawshank, a place he stands few chances of survival in, until he meets Red, a long term inmate played by Morgan Freeman who has a lot of experience and also a lot to learn. Their friendship is the main character here and the escape plan and punishment meant for the prison’s boss are only pretexts to further deepen the characters’ development.

Why is it on the list: Because this is one of those highly inspirational movies, filled with so many emotions, so much wisdom and so much character building, it may be seen as an initiation journey for both men, even if they stand still between the cold walls of the prison. This is again a story about humanity, kindness, decency and hope and it put both Tim Robbins and Morgan Freeman on the list of undeniable film masters. Even if after all these years, the movie has a story to tell and a message to teach and brings together concepts long forgotten. Is this movie about redemption? Maybe. But to most of us, it is a story about not letting anything to break the human spirit.

Quintessential quote: “Andy Dufresne – who crawled through a river of shit and came out clean on the other side.” (Red) 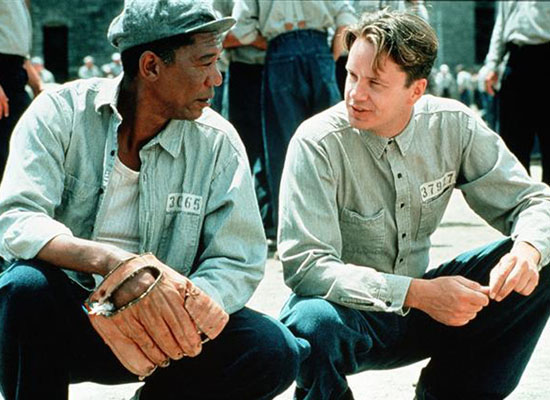 The Story: For the narrator, a young insomniac living what may seem to be the perfect American life (a day job, a nice apartment, not much money, but a decent way of life) – his personal existence became a living hell, as days pass by in the most monotonous of ways and he sees no hope, no joy, no satisfaction at the day’s end. He’s a health time bomb, as insomnia gives him the worst secondary effects and all seems lost until he meets the slick and freak soap seller Tyler Durden, a complete opposite of him, a man with a plan and such a demented idea, it might just work. Durden believes in physical fighting as a form of new, relieving therapy for men, and not much time goes by until “fight clubs” begin to pop up in every city. But strange neurotic Marla Singer happens to the testosterone-driven duo and from that point on, things go down fast and chaotic, to the point of self oblivion.

Why is it on the list: Because it made a riot when it was released. Because it is a cult – movie which sky rocketed the careers of Pit and Norton and made Chuck Palahniuk become a star among stars in the transgressive fiction literary genre. Because it is a story of finding identity, of proving one’s worth, because it tells a story about human spirit disintegration, soul losing, cause fighting. Because it told so many truths about people, society and authority that it both shocked, pleased and infuriated. Because the ending is not like in the book and that makes it at least controversial and because it teaches us that losing control can happen in a blink of an eye. 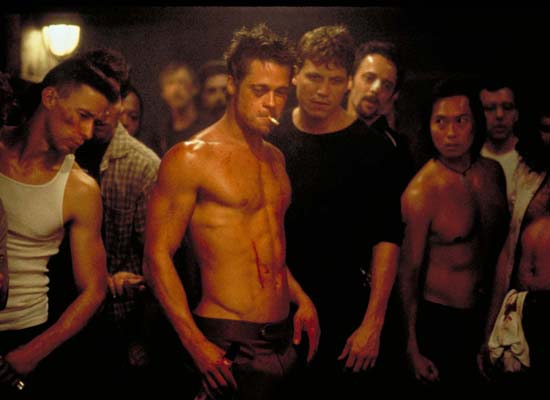